The layout, which is mainly double track, emulates the operation of a busy passenger and freight railway. It requires at least 8 operators to run to timetable, although a single operator can pass trains progressively along any route in a more leisurely fashion. A DC control system is employed with no less than 18 main control panels, supplemented by 2 local control shunting panels. There are around 400 turnouts (switches), of which 30 are electrically operated. Each panel creates the illusion of the operator being in control of their own signal box. However, there are no easy berths! Even with 8 operators available, individuals may have charge of as many as 4 locations which, although next to each other in the room, may represent quite distinct and unattached sections of the layout!

By providing a cross section of a substantial portion the British Isles the railway incorporates trains from all four pre-nationalisation companies.  This allows for added complexity in terms of what types of rolling stock can be operated on different services, although this is not always appreciated by Australians lacking familiarity with the UK of 50 years ago!

Operation of such an intensive service requires around 110 locomotives, approximately 230 coaches and parcels vans and over 400 goods wagons. Passenger workings on Banbury Connections comprise Western Region trains from London to Birmingham, Wolverhampton, Birkenhead and Aberystwyth as well as Eastern Region trains from London to the Great Central. Cross country workings from Gosport and Bristol operate to both the Great Central and north-western main lines. Services consist of all stops suburban trains, semi-fast and express passenger services. In all 35 passenger trains are required. These range in size from single vehicles to 7 coach expresses. These trains need to be carefully timetabled to minimise station and track congestion.

In addition to the significant amount of passenger traffic, freight trains run regularly to transport goods to and from towns and industrial areas. These include 6 coal trains of which 3 connect the Nottingham coal mine to London, Gosport and Bradford. There are 3 oil trains which transport oil from the port at Gosport to Wales, the Great Central and Wolverhampton as well as other intermediate towns. In addition there are 9 general goods trains that provide pick up and set down between the various general goods facilities on the layout. Other specialist goods trains include a brick train from the factory at Chester to London, iron ore trains from Machynlleth to the steel works at Sheffield, a steel train from Sheffield and cement train from Rugby to where required, Transfesa continental ferry van trains from the continental ferry terminal at Gosport to Sheffield and the north-west, 3 milk trains that travel from Wales to London and Birkenhead, a grain train from Leicester to Machynlleth and Aberystwyth, a cattle train, horse train and 2 fish trains. The latter connect the harbours of Portmadoc (Porthmadog in contemporary Welsh spelling) in Wales and Cleethorpes on the Great Central to London. Some freight workings, which run on a regular basis, need to be timetabled in between passenger trains. Many, however, operate during the night session when traffic densities are lower and the two sleeping car trains replace daytime passenger services. 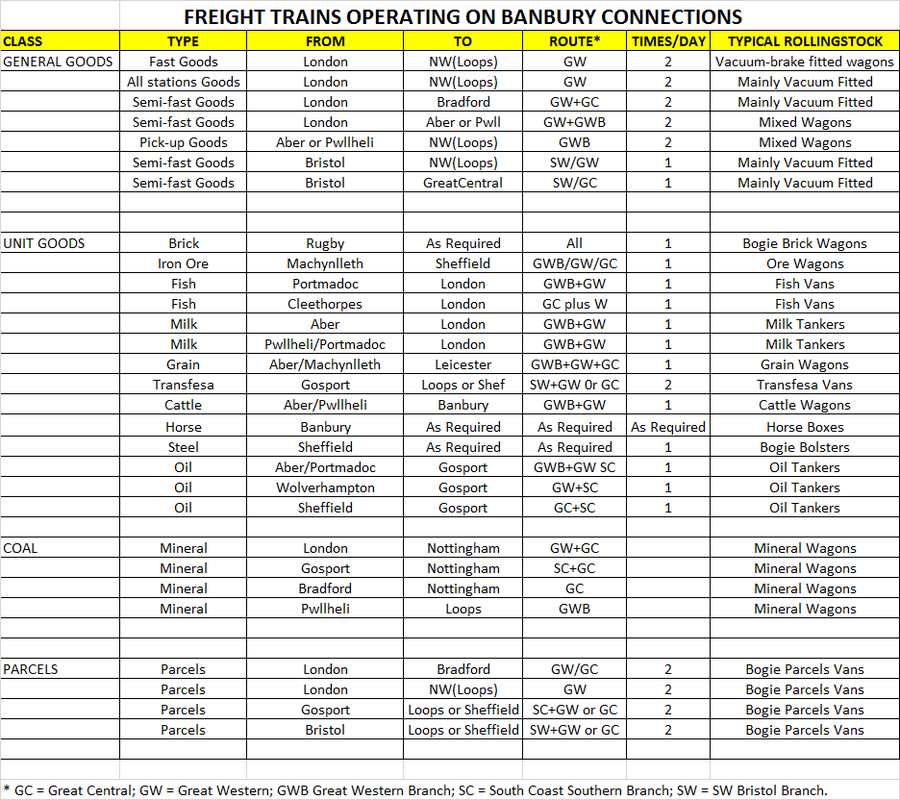 Freight Trains Operating on Banbury Connections
The core of the railway is located at the busy operational hub of Banbury which is the junction for the Southern, Great Central and Western railway lines. This control panel, which comprises 7 stations and 4 transfer points, as well as 2 triangular or delta junctions, must be carefully managed to ensure traffic flows smoothly to all parts of the railway. For this reason, the timetable is governed by train capacity at Banbury and the controller is kept very busy when operations are in full swing!

In timetabling terms Banbury is the pivot point for the whole operation. On average a single passenger movement through the area controlled by this panel takes approximately 4 minutes. However the operator has one controller for each direction and, if appropriately multi-tasked, can theoretically manage about 30 trains per hour in total! In practice up to 20% of theoretical capacity needs to be set aside for contingency, such as late running, which means that the practical number of trains that can pass through the Banbury control area each hour is 24. This total has to be allocated to the various routes, bearing in mind that each “up” movement will generate an opposing “down” movement in the reverse direction. (In the UK trains towards London are always referred to as “up”, whilst trains from London are “down”. On routes that do not have an obvious London direction, “up” and “down” are nominated in a manner determined by a mixture of history and convenience.)

The timetable pattern adopted requires 7 trains per hour to operate from the main terminus at London Marylebone at approximately 6-10 minute intervals. All stops trains follow in the wake of an express as they will take longer to clear the sections. Once the return workings are added, and shunting and turning of locos taken into account, the Marylebone operator has plenty to do! The remaining 5 up trains per hour impinging on the Banbury control panel comprise 2 from the single track Gosport branch and 3 from the Bristol direction.

Operating the railway is relatively complex as trains run between control panels and operators transfer trains to each other in transfer sections, often whilst the train remains in motion. This allows for the through running of trains across multiple control panels staffed by different operators. Each electrical section on the railway is either controlled by a switch on one of the control panels or is point isolated. Trains are driven using conventional DC controllers of generally British manufacture. Operators need to be familiar with their station’s track layout which corresponds with the diagram on their control panel. A Manual has been prepared by one enthusiast to assist in panel familiarisation!

The complexity of the railway is enhanced by about 250 working hand operated semaphore signals. These signals add to the realism of the railway and its operation although, in the heat of the moment, failure to properly signal the road is a common shortcoming of the less experienced and indeed more experienced operator! With such a high traffic intensity on the railway, the track keeps itself relatively clean, although track and wheel cleaning keep the owners occupied both during and between sessions. 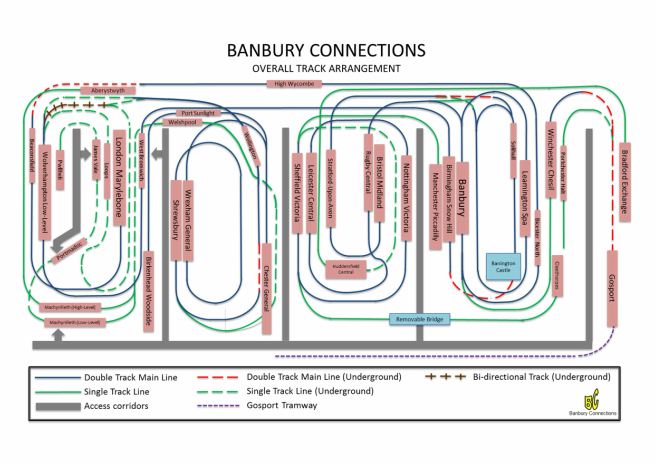 Banbury Connections: Overall Track Arrangement (The full size map is downloadable under the 'Resources' section of the website)